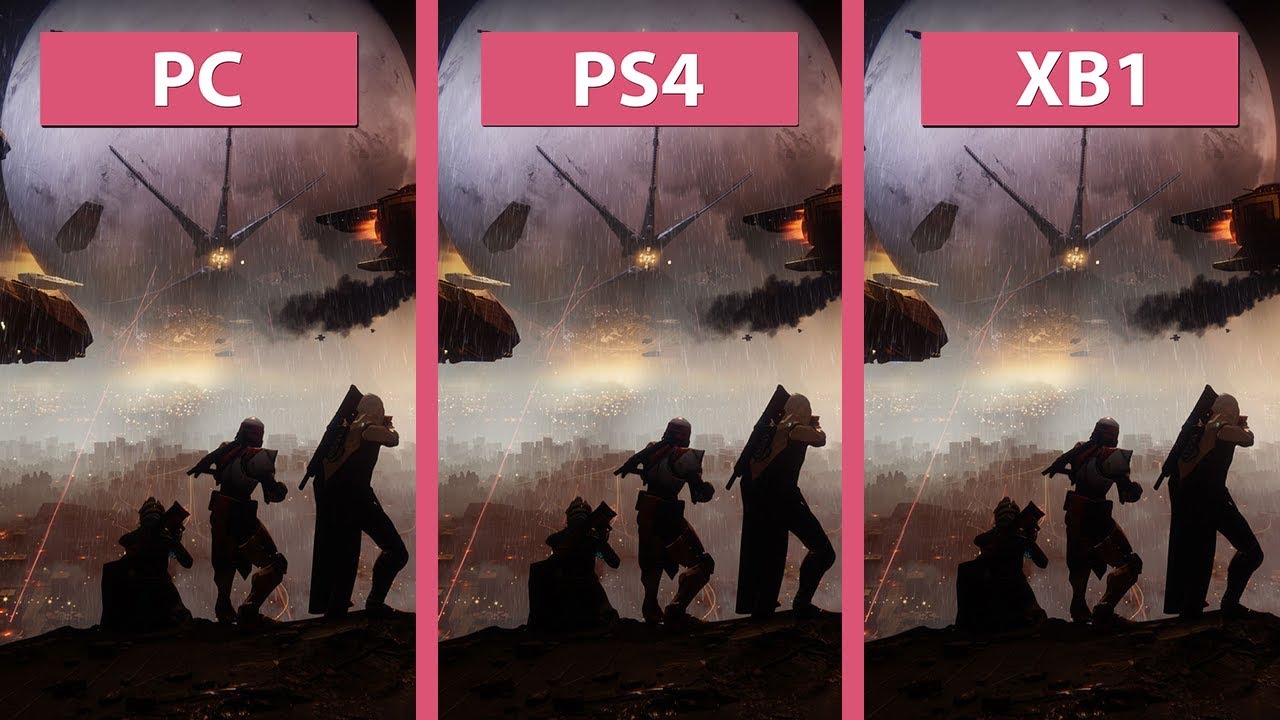 Destiny 2: Season Of The Worthy is now available

Bungie is happy to confirm that Destiny 2: Season of the Worthy, is now available for all Destiny 2 players around the globe. To celebrate this awaited launch, Bungie developer’s team is proud to reveal first gameplay content in a brand-new video and introduce the Season of the Worthy as another great leap forward for the journey of the players in the world of Destiny. Season of the Worthy is an i...[Read More]

The Dawning returns to Destiny 2 on December 17

‘Tis the season of giving… and cookies. The Dawning returns to Destiny 2 on December 17. The Dawning is a special time of year where Guardians spread cheer (and cookie crumbs) throughout the solar system while keeping the Darkness at bay. It might be cold on the Moon, but it’s warm and toasty at the Tower. Follow the smell of baking treats and celebrate your victories around the glow of Eva’s Holi...[Read More]

Starting October 1, independent game development studio Bungie takes the first step toward the next era of Destiny 2, Bungie’s critically acclaimed sci-fi action MMO, with a vision of Destiny becoming a single, evolving world for friends to play together anytime, anywhere. Today marks a massive, foundational shift for Destiny. “During 2019, we’ve developed and shared a clarity of vision we’ve neve...[Read More]

Claim Destiny 2 for PC as a free gift

Destiny 2 has attracted legions of dedicated fans and has been enjoyed by millions of gamers around the world since launching in 2017. Now, that fanbase is set to grow as new Guardians will be able to enter the world of Destiny 2 for free in November. To celebrate an entire year on PC, Bungie and Activision, in collaboration with Blizzard Entertainment, announce that from November 2nd to November ...[Read More]

Destiny 2 gets a new chapter, Forsaken

Bungie, High Moon Studios and Activision revealed today that Destiny 2: Forsaken, the first major expansion of the award-winning Destiny 2 video game, will release worldwide on September 4, 2018. Destiny 2: Forsaken will be available for download on PlayStation 4, the Xbox One family of devices including Xbox One X, and PC. The PC version of the expansion will be available exclusively on Battle.ne...[Read More]

Bungie has released the new march update (1.1.4) for “Destiny 2“. This update consists of a variety of changes to the Destiny 2 sandbox and Crucible, while also bringing with it unique Nightfall rewards. Players will now be able to enjoy a weekly rotating Crucible playlist, which contains 6v6 Iron Banner, Mayhem and Rumble. Sandbox changes include faster super recharge, weapon buffs an...[Read More]

If you haven’t decided yet if “Destiny 2” might be a game for you, well from today you can download it and start the “free trial“. Available on Xbox One, PS4 and PC. Team up with friends or play solo and experience your first steps in the epic cinematic-filled campaign, explore new worlds, and face off in competitive multiplayer.

Destiny 2 will launch for the first time on PC on 24th October at 6pm BST  via the Blizzard Battle.net app. A wide variety of activities awaits from story content and incredible cinematics, to exploration of new worlds, competitive PvP multiplayer, and more ways to play with other Guardians through Guided Games, and Clans. Destiny 2 on PC will support feature sets including: 4k Resolution Support ...[Read More]

It’s here. Our very in-depth review of the new “Destiny 2” and it just might be our Game of the Year! Here’s a snippet from our review: Fans of Destiny 1 rejoice: everything you achieved was for nothing. Your light level? Gone. The gear you chased for years? Gone. The myriad accolades, ships, vanity items, virtual trophies, emotes and all those consumables you were never go...[Read More]

The Best of Bungie: “Destiny 2” is many things; it’s a tighter, leaner, far more generous beast than its predecessor. It’s a developer firing on all cylinders, and then some. It’s a masterclass in how to ruthlessly trim the fat and focus on the fun. It’s the realization of a promise made three years ago. Hell, it might just be the best apology I’ve ever heard. But more important than a...[Read More]

In just over two week’s time players globally can play the Destiny 2 console open beta on July 21st at 6pm BST through to 5am BST on July 23rd. The Destiny 2 beta will feature a variety of activities including the opening story mission, Homecoming, and cooperative and competitive modes. Pre-order early access to the beta on PlayStation 4 begins July 18th whilst for Xbox One players, early access b...[Read More]

The Open Beta for Destiny 2 starts today, August 29. It’s open to everyone though this beta test is PC only. You’ll have to download Blizzard’s Battle.net launcher if you don’t already have it. The brief open beta period is only available this week, ending August 31.

Destiny 2 is the sequel to the 2014 multiplayer shooter by Halo developers Bungie. Destiny was a popular though divisive loot-based cooperative shooter. It steadily evolved over the years thanks to content patches and expansion packs. Destiny 2 marks the series first foray onto the PC.

A Digital Deluxe Edition is available for pre-order that includes the Expansion Pass and Legendary Sword and Player Emote. The Expansion Pass will provide access to two future content packs. The first arrives later this year while the second is scheduled for Spring 2018.

Destiny 2 arrives next week on September 6 for PlayStation 4 and Xbox One. PC owners will have to wait a bit longer, on October 24.

Destiny 2: Warmind Review – Every good thing has a flaw… mind

Reviewed on Xbox One.  Yes, it’s time for another Destiny expansion. If you guessed that Bungie adds some good things, and bungles up some other things, you’re either psychic or just remember almost every other Destiny release. But don’t worry too much, as Destiny 2’s second expansion, Warmind, does a few more good things than usual. But still the same amount of not so good things. Let’s start wit...[Read More]

Will Bungie do enough to fix Destiny 2?

Following community-wide backlash over the current state of the game, particularly with the recent XP throttling, Bungie cancelled the final Curse of Osiris livestream and instead posted a blog addressing many issues within the game. The fixes will be tweaks to Destiny 2’s various systems, mainly loot, but won’t fundamentally change the game. So, if you hate PVP you’re still going to hate it. On t...[Read More]

Today, Bungie lifted the veil on Destiny 2’s upcoming Curse of Osiris DLC during a Twitch stream, and some sites even had access to the whole campaign to give their early impressions. If you want to go through every gory detail that Bungie revealed, the hour-long stream can be viewed here. Otherwise, here are the five main takeaways. 1: Leviathan raid expansion Rather than getting an entirely new ...[Read More]

Reviewed on Xbox One, copy supplied by publisher.  I feel bad for how much I enjoyed the first Destiny. Despite all the issues, I found enough nuggets of fun to last me an absurd amount of time. But Destiny 2 makes the original and all its expansions look like nuggets of shit. I suppose that’s good for a sequel, but it just seems to show how rocky the launch of Bungie’s franchise was, with a ‘cine...[Read More]

Like every other reviewer, we’re still grinding our way through Destiny 2, but that doesn’t mean we haven’t already learnt a few things. So, if you haven’t had the time to fully invest yourself into Bungie’s loot-pit, or you’re just plain stuck, here are some quick tips that will help you catch up or give you a smoother experience. Levelling is more streamlined As with The Taken King and Rise of I...[Read More]

Games should give the slow moving injury sequences a rest

Destiny 2 is the latest in a long line of games to feature an extended sequence where the protagonist is injured – which naturally causes them to move like a snail. The mechanic isn’t exactly new. In fact there are so many examples of it that I can’t think of them all off the top of my head (feel free to comment some examples below). Controlling a slow moving character is basical...[Read More]

Destiny 2 on PC: Beta than console

I covered most of my general thoughts about the Destiny 2 beta in my analysis of the console beta, so I’ll keep most of my focus on how the game performs on PC. In short: Destiny 2’s PC version seems to be the pinnacle of the game. The PS4 version can keep all its exclusives, and Xbox can keep its nothing of value; the PC is where the game runs smoothest and is the most visually stunning. I’m not ...[Read More]

Destiny 2’s Beta analysis – The good, the bad, and the beautiful

There wasn’t much to do in Destiny 2’s console beta, but there’s plenty to talk about. From PVE to PVP, let’s start with the good. The opening mission was one of the best ever As Charlie said in his initial impressions, the opening mission, ‘Homecoming,’ quickly set up Destiny 2’s story. The Cabal are invading, we meet Gaul, and spoiler alert, we lose. Destiny 2’s plot is looking to be stron...[Read More]

I’ll be the first to admit that the original Destiny left me with a resounding meh. Personally, I found the game to fall flat in terms of narrative and gameplay, but this was back in the early days of release. To say the least I was hesitant going into the Destiny 2 early access beta – which is now live on PlayStation 4 and will be live on Xbox One tomorrow ahead of the open console be...[Read More]

The full reveal trailer for Destiny 2 dropped overnight, showing old allies, new foes, and the destruction of all your previous loot. The limited editions of the game have also appeared on retailer sites like EB Games and JB Hifi, and have confirmed the long standing rumour that Destiny 2 is coming to PC. First we have the big Collector’s Edition which costs a staggering $349 for consoles and $339...[Read More]

Multiple images of a retail poster for Destiny 2 have supposedly leaked from Italian Gamestops, showcasing a somewhat revamped art style, Beta entrance for preorders, as well as a release date of September 8th. There are multiple sources confirming it’s real from Kotaku and Eurogamer. Kotaku also reports that its sources state Destiny 2 is coming to PC, will have a June beta and the official...[Read More]

Destiny 2 coming to PC? + Only character cosmetics to carry forward

Bungie has officially announced that your current Destiny “power, possessions, and Eververse-related items and currency will not carry forward” into Destiny 2. However, if you’ve reached level 20 and completed the main Black Garden questline your character personalisation will carry onward. This includes your class, race, gender, face, hair, and marking selections. Not much, but it’s something. No...[Read More]

What’s New in the Destiny 2 Beta For PC Archives?