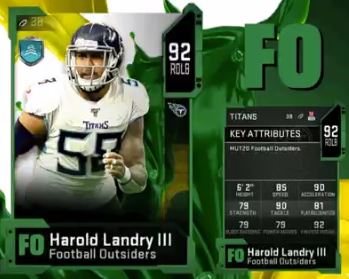 When you play a connected franchise, (in previous incarnations it was called franchise mode) you have access to season and career statistics for an individual. In the vacuum of an offline franchise, that's nice and all, but it would be a lot more valuable in MUT. This is my first experience with Ultimate Team or online play; Before Madden 25 I played Madden 09, and before that Madden 05, so there some gaps in my experience. Has the mode ever kept a listing of your team's cumulative individual statistics for review? Has EA ever commented on the potential for such a feature? Is this in fact already a feature that I am gloriously ignorant of?

Obviously any online game ought to be streamlined to maximize gameplay, but I imagine that keeping a personal archive (a user could only view their own statistics) wouldn't be a server burden. Perhaps the issue is quit games? Personally, I think it would bug me more to have non comprehensive data than no data at all- but I'd imagine it is plausible to still save data and statistics in the event of a quit game, even if it's not something they have currently implemented. Even if it's not, as I've climbed the tiers, I've experienced far less rage quitting amongst the competition, which is nice. I don't get mad at rage quits against me now, but I might get annoyed if it messed with my statistical compilation!!

Beyond just keeping a neat listing of your team's progression as you amass better cards or employ different schemes- (For instance, I'd like to see how my QBs progressed from 80 Gift Montana to 86 Eli to 93 Ryan to 97 Brees to 99 Eli, with a couple attempts from 96 Andrew Luck and 96 Nick Foles sprinkled in there.) It would also give you an opportunity to see the results you're getting in a concrete and definitive way. I went from a Pierre Thomas/Marshawn Lynch combo to a Matt Forte/Eric Dickerson combo, and I'd like to be able to chart the statistical improvement, if in fact there has been one. I'd like to see which of my players have come down with the most picks (It's got to be MVP Polamalu- but I imagine he's got a 2:1 ratio versus the field, and that cannot be right) or enjoyed the most YAC or broken the most tackles per attempt. Would it really accomplish much? Perhaps not, but I know it would give me a level of satisfaction, and that's ultimately why we play games, right?

I love playing the game, but I also love tinkering with the game; Franchise mode was a lot of fun for me when I was in high school (especially before I could drive) a decade ago, but online play feels far more engaging. When I've sent all my spare parts to reserves, maxed out my auction house queue, and am waiting to sell a few cards so that I can put a few more on the market, I'd love an opportunity to peruse my team's All-Time statistics.

I suppose this post is an attempt to gauge interest in such an endeavor, and see if there's enough groundswell that EA might take notice and configure a statistical archive for Madden 15. It's going to be weird going from Madden 25 to Madden 15, although, my first experience with Madden was on Madden 64, so... all over the place. Boom!

Product: Madden NFL 21
Platform:Microsoft XBOX One
Which console generation do you have?XBOX One X
What is your gamertag/PSN ID?The Lifeguard
Date/time issue occurredAll the time
What type of issue do you have?Crash/Freeze
Which mode has this happened in?Ultimate Team
Which part of the mode?MUT Champions
Summarize your bugSays servers cannot process your request everytime I hint ultimate team but I can play head to head online fine
How often does the bug occur?Every time (100%)
Steps: How can we find the bug ourselves?Through my profile try to log in alot of people are having same issue on twitter
What happens when the bug occurs?Doesn't let me in hasn't in 4 days was in on 8/20 just says not available but it is not on my end
What do you expect to see?To log into madden ultimate team after maybe an hour of trying
PS4 Crash Reporting: Please copy the text you put in the crash report here.
What is the AMD or Nvidia Model Number of your graphics card?
Enter RAM memory size in GB